My REAL journey to becoming an Ironman 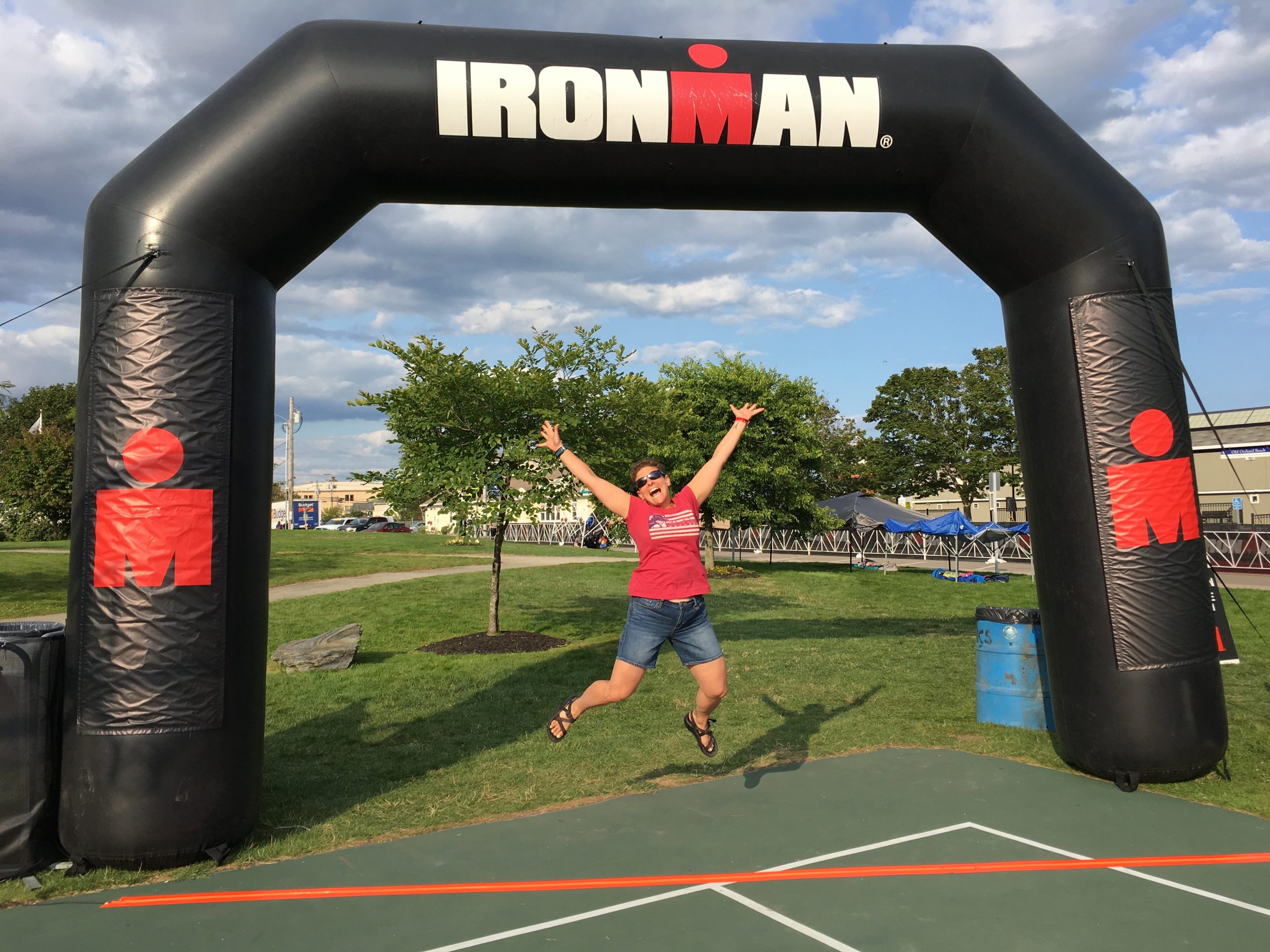 Today is not the first day of this journey. I have been telling myself to start recording my experiences since I signed up and am finally actually doing it. Here’s some backstory:

My very first triathlon experience was in 2009. I did the swim leg in a relay for a sprint tri. I had not really trained and had never worn a wetsuit, but when I was asked I figured…why not. It’s just a 400 m swim. So I reserved a wetsuit for the race, swam a couple times in the pool and on the day of the race, all of the excited feelings of being in a competition came back.

As I watched my brother Mike participate in triathlons, I was amazed. I never imagined I could do something like that, but began to encourage my children. Nathan did his first tri in 2011 at 10 yrs old and Claudia joined him in 2012 shortly after her 7th birthday. It was fun to watch them and I thought they were pretty cool competing just like the adults did. The kids told me I should do one. I could see myself swimming and biking, but running after all that? NO WAY!

Nathan at his first triathlon, August 2010.

In September 2012 a friend invited me to do a 5K road race with her. I had never liked running and certainly never ran 3 miles! “What’s the worse thing that happens? You walk,” she said. So I signed up, got some advice from Mike about training and on October 15, 2012, I completed my 1st 5K in 32:05, what I considered a respectable time. We began to sign up for other races and I enjoyed the social aspect of the events and started setting goals for myself. At one point, Claudia said now that I’m running I could do a triathlon. I couldn’t argue with her so in May 2013, I bought a road bike and started training. I completed my first sprint at Nantasket Beach in MA on September 22, 2103 in 1hour 20 minutes 29 second. I was a triathlete and I was hooked.

I discovered I liked the variety of triathlon. Having 3 different sports to train kept me interested and I didn’t get bored. I liked the feeling of pushing myself and the people I was meeting along the way were always so encouraging. In 2014, I did 2 sprint tris. In 2015, 2 sprints and my first Olympic distance. 2016 was the year it got serious. I ran the Paris Marathon with Mike, completed my first half iron tri as well as 4 sprint tris and 1 Olympic. It was a year of huge accomplishments sprinkled with some injuries and even a podium finish.

I started thinking about completing a full ironman, but knew I needed to regroup. I began by focusing on nutrition and losing weight and by February 2017 I had lost 20 pounds and gotten much stronger. I successfully completed one half iron at the beginning and one at the end of the summer, proving that I could maintain the endurance training. This is when I decided I was ready to go for it.

Taking the first step – signing up

There has been no greater inspiration in triathlon than my brother Mike. Since we were kids, we have been very close and have always loved going on adventures together. Every time I had a tri question, he was the first person I asked. He is serious, but competes to have fun and improve himself, just like me. So I announced my plan to take on Ironman and asked if he’d join me. Considering location and schedules, we decided on Ironman Mont Tremblant near Montreal, CA on August 19, 2018. Filling out the online registration was already nerve-wracking. I have this perpetual feeling of excitement mixed with “what on earth am I doing?” But when I hit submit, I knew there was no turning back. I am on my way to be an Ironman!

There are a lot of things I enjoy about triathlon. One of my favorites is the reactions I get when I tell people about it. It motivates me when people tell me they are impressed or inspired or simply that they think I’m crazy. I have the most supportive family and friends. They are all so encouraging and supportive. I could never even consider this journey without Mark, my biggest supporter of all. I’ve seen many jaws drop when I explain that it is 2.4 miles of swimming, 112 miles on the bike and 26.2 miles running. Sometimes when I say it out loud, I think I’m crazy!

I talk to my 2nd grade students about my journey often. I use my experience as a way to show them how to always keep working towards something, even if it seems really hard. When I explained the distances, their little faces were confused and amazed at once. I asked them how long they thought it was going to take. Knowing that time is a developing concept, I was entertained and impressed by their answers. 3 days (I day for each sport?). 2 weekends (plenty of time to recover?). 5 hours (I wish!). And then one student (Toby) said 15 hours. He was really listening when I spoke of my double century ride and made an educated guess. And although my primary goal is to finish, breaking 15 hours is my secondary time goal.

I managed the beginning phase on my own, continuing to work on my nutrition and strength. I have to admit that I’m not as dedicated as I could be to the nutrition part. I’m keeping a relatively healthy diet, but have been cheating here and there which is keeping me from seeing the weight loss I had hoped. However, I am building strength and trying not to worry about a number on the scale. Programs like Shift Shop and A little Obsessed have been great for building muscle and targeting hips and glutes where I am prone to injury. I am currently following the 80 Day Obsession program, but its tough to fit the longer workouts into my schedule. I am integrating it as best I can and finally am trying the timed nutrition.

Oh yeah…then there is the swim, bike and run sessions. I’ve been really consistent with one strong swim session, one long bike ride and one moderate to long run each week. Official training starts on Monday.

Whether you are planning a long training session or just have a busy day ahead, keep your energy up with this easy recipe. There will be plenty to share with your workout buddies ! Ingredients: 1/2 c peanut butter 1 banana, chopped 1-1/2 c old fashioned oats 2/3 c...
Read More

Homemade guacamole is so amazing!

Did you know that homemade guacamole is so amazingly simple to make? The day I finally got brave and bought my own avocados was literally a turning point in my life. I heard so much about the great nutritional qualities of avocado. I know it’s one of those healthy...
Read More

Each year when the calendar turns to November, I notice people starting to talk more about gratitude. With Thanksgiving in our sights in the US, it’s a little reminder to step back and be grateful for all you have. The real gift of gratitude is that the more grateful...
Read More

Meet REAL Hannah, Like many people, she was feeling aimless in the midst of Covid. She has been active her whole life and has taken on a more competitive view on sports as an adult. Foot pain developed from running led to surgery in August 2019. Despite being strong,...
Read More

Egg Recipes Do you always have a carton of eggs in your fridge, but are tired of eating them the same way? My whole family loves eggs and they are such a great source of protein. I love how quick and easy it is to fry them, scramble them or make an omlette. And...
Read More

This is part 2 of my Race Report from the B*REAL Triathlon. You can read part 1 HERE (https://adinaoneill.com/breal-virtual-triathlon-part-1) The Olympic distance started first. Ready - Set - Go! I ran to the water and I started my watch. A couple of hurdle steps and...
Read More

Race Reports - Tell us ALL about it! Your race is NOT over when you cross the finish line. Yes, you put in all the hard work during training and took that victory lap on race day. Yes, you got your medal, race swag and post race celebration. If you're lucky you even...
Read More

Meet REAL Pam! “I was an athlete growing up with my focus on swimming. When I was 47 I decided to startrunning to help me stop smoking. I smoked for almost 30 years and would even smoke acigarette on the way to exercise classes. I told myself I was going to run a...
Read More

Having a little Flashback Friday Fun... I wasn't always an endurance athlete in great shape. It all started when my friend Red asked me to do a 5K with her. When I tried to get out of it by saying I didn’t run, she didn’t let me off the hook. You can walk, she said....
Read More

The simplicity of The Slight Edge mentality

I think I finally figured out why I never liked to read books. I wasn’t picking the right ones.  It’s been a long time since I read a book and just wished there was more to read. Not that there needs to be more to learn in this case, but just that this book really fit...
Read More

Get updates on my latest blog posts and let me help you reach your training goals..